First of all, welcome to the new website of Rail Transit OPS–formerly DPS Rail Operations. If you aren’t already, please follow us on Twitter at @RailTransitOPS for daily operational tweets and analysis about WMATA performance and safety.

Whew, now that we’ve gotten that out of the way, let’s talk about train predictions at terminus stations, shall we? They’re not very good, but a savvy rider can potentially make them better.

Let’s say you’re a customer waiting on the Vienna station platform. (Vienna is the west terminus station of the Orange line, for those of you who are unfamiliar.) If you’re lucky, when you pull out your phone to check wmata.com’s mobile website for when the next train is going to depart there–or most any other app for that matter–you’ll see something like this:

Somewhat informative, no? Sure. Unfortunately, this is again only if you’re lucky. Most of the time, you’ll probably see something like this instead:

Or, if you’re particularly unlucky:

These last two sets of predictions are particularly upsetting, and honestly the first one isn’t much better; what if you miss that train that’s leaving in 12 minutes? When will the next one after that depart Vienna? Fortunately, for whatever reason, if you were to look at the next station down the line from Vienna going eastbound (Dunn Loring) and its train ETAs, you’d probably see something like this instead: 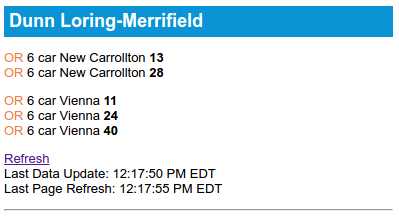 Now that’s more like it! Look at that: two trains to New Carrollton, and now we know the next train after that 12-minute one we observed from the Vienna predictions set will depart from Vienna sometime before 28 minutes. But given that this last predictions set is for Dunn Loring and not Vienna, exactly how much time will it take for that 28-minute train to depart Vienna from now? Well, if you know the average trip duration from Vienna to Dunn Loring, just subtract that duration from the 28-minute Dunn Loring prediction, and now you’ve got a derived prediction adjusted for Vienna. You can get a rough estimate of this trip duration from WMATA’s Trip Planner, just keep in mind that according to our WMATA sources, the trip durations that Metro uses for their trip planner do not necessarily correspond to what the PIDS (“Passenger Information Display System”) uses, which is the system that powers all of WMATA’s train predictions for both their station displays and website. That said, from the trip planner, it looks like the average trip duration is about 3 minutes, and 28-3 is 25, so there we have it: the next train to depart Vienna for New Carrollton (after that train scheduled to leave in 12 minutes) should do so in approximately 25 minutes.

So, what’s the catch? Well, that 28-minute prediction from Dunn Loring appears to use mostly scheduling data. For example, there’s no guarantee that train will have 6 cars; it could very well arrive at Dunn Loring with 8, simply because train schedules don’t account for number of cars. Also, these predictions are susceptible to disappearing at any time, for reasons unknown. This can be mitigated by keeping track of train ETAs separately from the PIDS even after they disappear from the data, but that’s heuristic and far from perfect. In any case, we at MetroHero do it with a fair amount of success:

10 and 25 minutes is a little better than “SILVER LINE LARGO CENTER,” no? Of course, we’re not miracle workers; if there’s absolutely no data available at a given terminus station nor its next station down the line at a particular time, there’s nothing we can do until that data magically returns:

Nonetheless, we consider this a small victory. Many customers start their Metrorail journey from terminus stations, so we think showing train departure times for these stations is particularly important, especially during weekday AM rush. After all, it’s frustrating to wait 15+ minutes for a train with no information about the delay you’re experiencing after just driving several miles and miraculously finding a parking space. Hopefully better predictions will be available for terminus stations soon by default, but in the meantime, this neat little trick–and MetroHero, of course!–might save you from the brunt of that frustration.

At 2:11PM 🟡302-3040/Huntington reported brakes locking in emergency in approach to Gallery Place - initial troubleshooting investigation interrupted after train operator reported light smoke due to a passenger opening an emergency door @dcfireems responding to Gallery Place
At 5:37PM 🟡 304/Huntington reported being unable to release its brakes after servicing King St and was offloaded by #WMATA at 5:40PM
Just after 12:00PM Train Control technicians reported lateral rail movement on the inbound track in approach to Stadium-Armory; #WMATA Emergency Response Team requested single tracking while they perform a detailed inspection.
September 2021 Financial Report
My Tweets